The Mont Blanc Transboundary Conference has launched the bid for Mont Blanc to become a UNESCO World Heritage Site, with the aim of achieving international recognition for the unique values of this cross-border space in terms of nature, landscapes and culture.

The Espace Mont-Blanc's numerous years of cooperation and the projects it has carried out have laid the groundwork to respond to the requirements of this bid, in particular by bringing together the technical and scientific experience and knowledge needed to drive forward the application process.

The bid for Mont Blanc to become a UNESCO World Heritage Site will initially involve local and regional authorities, with a focus on the three pillars of sustainable development: the environment, society and the economy. 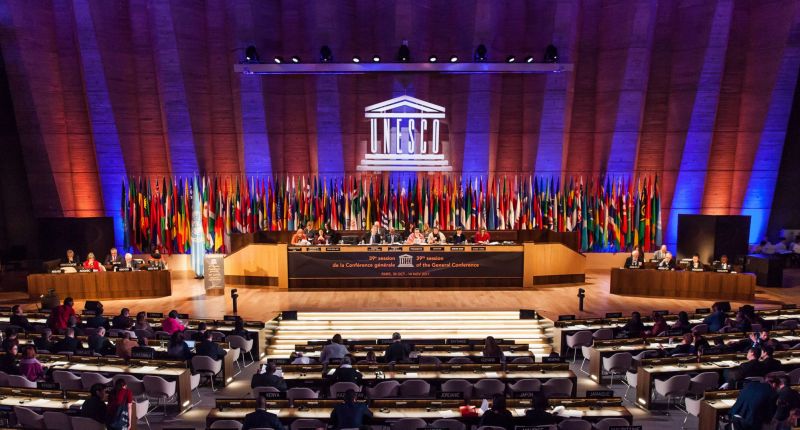 The Convention concerning the Protection of World Cultural and Natural Heritage was adopted by UNESCO in 1972. It requires States that have ratified it to preserve the cultural and natural heritage located within their territories by establishing systems and policies to identify, protect, conserve and enhance it.

The World Heritage List records cultural and natural heritage of exceptional interest to the common heritage of humankind, and which presents outstanding universal value according to the criteria outlined in the Convention. The List has been updated each year since 1978.

According to UNESCO, Outstanding Universal Value “means cultural and/or natural significance which is so exceptional as to transcend national boundaries and to be of common importance for present and future generations of all humanity”.

The key phases of a collective, coherent approach

Mont Blanc's inclusion as a UNESCO World Heritage Site would strengthen the bonds of trinational cooperation that the countries have established to preserve this exceptional heritage site and ensure that it is passed on to future generations.

About the bid 10 questions

What is UNESCO World Heritage?

The United Nations Educational, Scientific and Cultural Organization (UNESCO) was founded in 1945 with the aim of maintaining peace between peoples.

The UNESCO Convention on world heritage originated in the international campaign of 1959 to save the Abu Simbel temples in Upper Egypt. This first campaign led to international awareness of the notion of “heritage,” which was embodied by the adoption of the “Convention concerning the Protection of World Cultural and Natural Heritage” during the UNESCO General Conference in Paris on 16 November 1972. There are currently 193 signatories to the Convention.

The interaction between humans and nature, and the fundamental need to preserve the balance between them, was the founding principle at the root of the Convention. It is a principle that has not only been upheld, but that has been developed in the subsequent guidelines that have informed how the Convention has been applied since its approval.

Outstanding Universal Value (OUV) lies at the heart of World Heritage. OUV is defined in Article 49 of the Convention: “Cultural and/or natural significance which is so exceptional as to transcend national boundaries and to be of common importance for present and future generations of all humanity”.

The OUV of the candidate site must fill a gap on the World Heritage List.

How many categories of World Heritage Site are there (natural spaces, cultural sites, intangible heritage, etc.)?

The Convention originally established three categories of site: cultural sites, natural sites and mixed sites (natural and cultural). In 1992, during the 20th anniversary of the Convention, a fourth category was adopted (cultural landscapes), highlighting the link that exists between cultural identity and its natural environment.

Bids are evaluated by one of UNESCO's two consultative bodies depending on the type of heritage. The ICOMOS (International Council on Monuments and Sites) handles cultural heritage and the IUCN (International Union for Conservation of Nature) handles natural heritage, while both bodies assess mixed heritage candidates.

Cross-border heritage does not constitute a category in itself, but offers the possibility of bringing together all heritage and attributes of outstanding universal value, whatever the political borders. It therefore represents an example of peaceful international cooperation by several countries in the interests of shared heritage, and encourages such cooperation.

In addition, intangible heritage is the subject of the “Convention for the Safeguarding of the Intangible Cultural Heritage” adopted by UNESCO on 17 October 2003, which is intended to protect, “the practices, representations, expressions, knowledge, skills – as well as the instruments, objects, artefacts and cultural spaces associated therewith – that communities, groups and, in some cases, individuals recognize as part of their cultural heritage”.

How do you become a World Heritage Site?

The first step of the application process is to register on the national Tentative List website. The Tentative List is a provisional register of the heritage sites that the State Party may choose to nominate over the next 5 to 10 years. It can be updated at any time.

The second step is to draft an application in the form of a very comprehensive, wide-ranging document that uses scientific studies to establish the candidate site's Outstanding Universal Value, including its integrity and authenticity, and demonstrate that its characteristics meet the UNESCO criteria. The application document also includes the site's long-term management plan.

Once the application is ready, it will be submitted to and examined by the government organisation(s) responsible for implementing the Convention.

The final decision is made by the World Heritage Committee (which makes its decision, on average, one to two years after the application is submitted). During its ordinary annual session, it rules on whether or not to list the new site, send back the application pending further information, or defer the decision.

No.  The Mont Blanc Transboundary Conference, which met in Chamonix on 24 October 2017, chose to launch the process prior to the submission of a cross-border application, coordinated by all three States, for the Mont Blanc massif to be included on the UNESCO World Heritage List. It committed to involving local residents and stakeholders and to prioritising the three pillars of sustainable development in the application's strategic guidelines.

This preparatory study phase was required to provide the necessary elements for identifying the site's Outstanding Universal Value and for choosing the classification type (natural heritage, cultural landscape or serial site, i.e. part of a series of sites) and the boundary.

Mont Blanc is already included on the Tentative List (it has been on France's List in the mixed category since 2000 and on the Italian list as a cross-border natural site since 2008). The preparatory phase should also result in an update to and harmonisation of Mont Blanc's inclusion on the Tentative Lists of the three countries concerned, which constitutes the first true step along the application process.

Who will submit the application?

Where will the boundary lie?

The boundary and any buffer zones are strictly linked to the choice of the type of classification: natural heritage, cultural landscape or serial site. The boundary(ies) will be the subject of extensive considerations, taking into account the landscape and natural values, territorial coherence and spatial planning issues with regard to the local authorities' ambitions.

How long will it take for Mont Blanc to become a World Heritage Site?

A comparison with other UNESCO sites has shown that the procedure for drawing up the bid and involving local residents is fairly logical. The Swiss Alps Jungfrau-Aletsch site took eight years, while the Italian Dolomites site took six.  Drawing up the application for the Alpes Maritimes - Mercantour cross-border site, after its inclusion on both States' Tentative Lists, took from 2012 to 2017, with the final submission in February 2018.

Following submission by the States, there is a two-year wait for the decision of the World Heritage International Committee.

How much will it cost?

The provisional plan for the bid's funding is one of the expected results of the preparatory phase launched by the Mont Blanc Transboundary Conference.

The sums connected with the necessary studies and assessments will be shared across the borders between the stakeholders, bearing in mind that the Espace Mont Blanc expects to draw on the studies that have already been carried out and mobilise its cross-border technical and scientific networks.  UNESCO does not grant funding for applications or ad hoc funding.

Who will draw up the application?

The application is a complex document comprising, in particular, the scientific reasoning for the site's OUV, the comparative analysis demonstrating its uniqueness compared to other similar sites (whether or not they are World Heritage Sites, and on a global scale), an evaluation of the site's authenticity and integrity, and the management and governance plan.

The intention is to entrust a cross-border technical and scientific team with the task of drafting the application. This team will be led by the regional and local authorities concerned and by stakeholders. The studies, information and data collection performed at a cross-border level over the years may be used.

The Mont Blanc Transboundary Conference intends to include all interested parties and have the local area actively participate in drawing up the application.